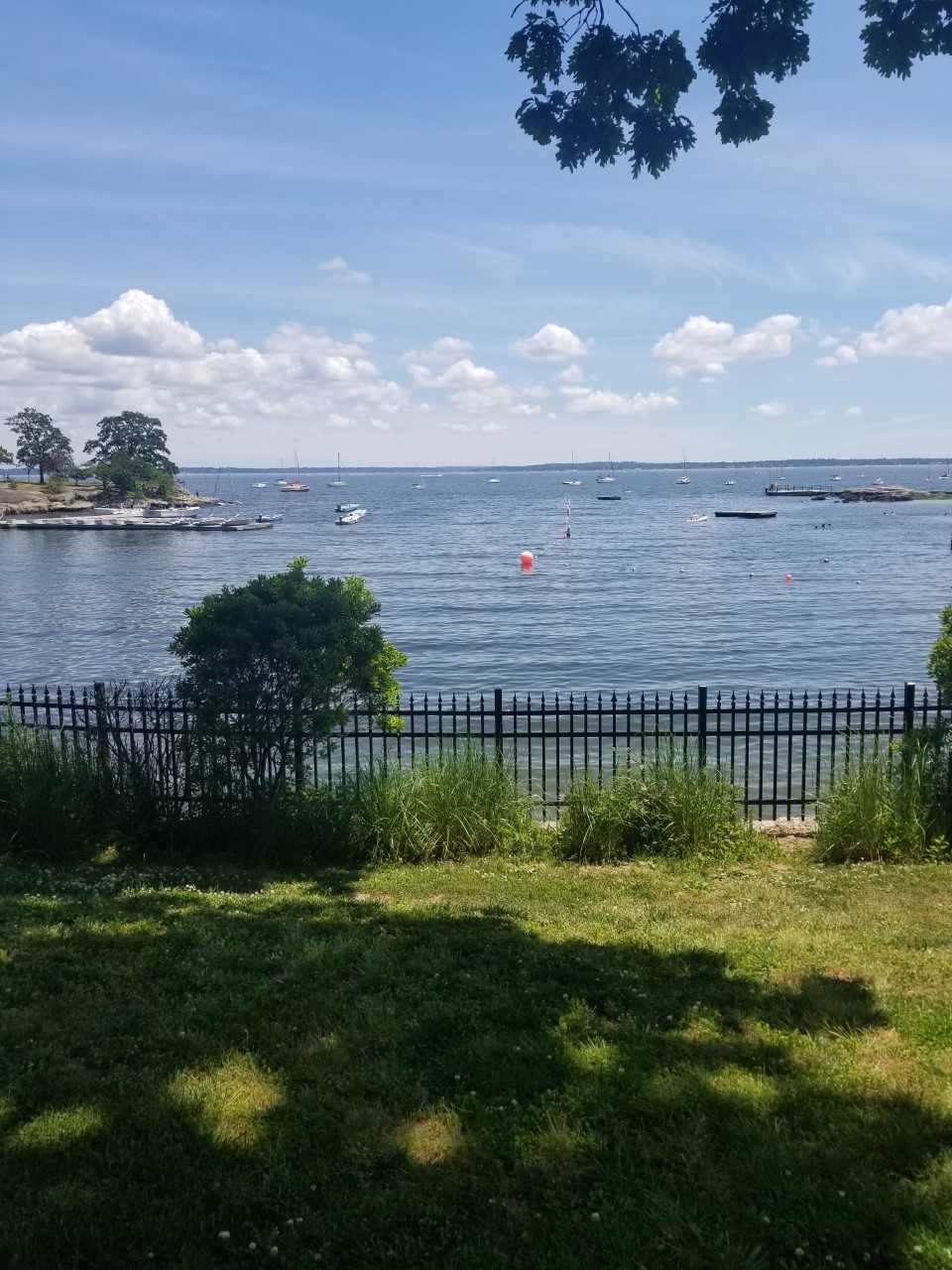 This week zoomed by.  It was a blur.  Phase III started on Tuesday in New Rochelle.  Restaurants are now open for indoor seating at 50% capacity. Some restaurants put tables on the sidewalk and I love that.

On Sunday I had my first meal at a restaurant.  My sister and I were spending the day with a friend.  We went to Chat 19 in Larchmont because they have outdoor seating.

We had a great time, and great food.  After that we went to the Larchmont Manor Park, shown on the picture above. It was a beautiful day.  It felt freeing.

“Feelings come and go like clouds in a windy sky. Conscious breathing is my anchor.”― Thich Nhat Hanh

Last night, Friday I met a friend/business acquaintance for an afternoon drink/early dinner.  I showed her my neighborhood and we chose to sit outside at a Colombian Restaurant.  My sister met us there after she finished work.

We had passionfruit mojitos and empanadas and skirt steak, among other things.  All delicious.  We were sitting there talking and people watching for over 4 hours.  I also learned a lot about her life here and back in Australia where she is originally from.  I knew very little of her up to last night.  It is wonderful to understand the reasons why someone does what they do, or live the way they live.

“Is it possible, in the final analysis, for one human being to achieve perfect understanding of another?
We can invest enormous time and energy in serious efforts to know another person, but in the end, how close can we come to that person’s essence? We convince ourselves that we know the other person well, but do we really know anything important about anyone?”― Haruki Murakami

Tonight I will have my first date from Match.com.  I just realized that he is only 39 years old, and I am not.  I have thought about canceling but I don’t think there is any harm in meeting him and making a new friend.

He seems so nice and thoughtful.  He is driving over 1 hours from NJ to come to my neighborhood to take me to dinner.  He chose a nice restaurant with a back patio that looks great.

I will go with an open mind, and don’t let the age influence me.

UPDATE: Right as I was about to post this I received a text from my date saying he had to postpone it for next week.  He said had to stay near his laptop because of some work crisis. He also added: “The only other option would be for you to come here”

I don’t know if this is true or not, or if he is just being lazy trying to have me drive to him instead of him driving to me. Whatever it is, it just feels lame to me.  I will definitely not be going to him.  My gut tells me that a date next week doesn’t seem likely.

“Maturity, one discovers, has everything to do with the acceptance of ‘not knowing.”― Mark Z. Danielewski,

So it seems life is getting back to normal, or I should say new normal.  Will the new normal be better than the old normal?

As I wrote that I paused to reflect.  Do I want everything to go back to normal?  Yes and no!  I guess this is the perfect time for me to reflect on the changes that I want to make and keep in my life.  What I want my new normal to look like?  For starters I want to have a better work-life balance.

What a wasted opportunity life would be if we as a humanity didn’t learn anything in the last 4 months? Time to reflect in our own lives and see where we can improve to benefit ourselves and our neighbors.