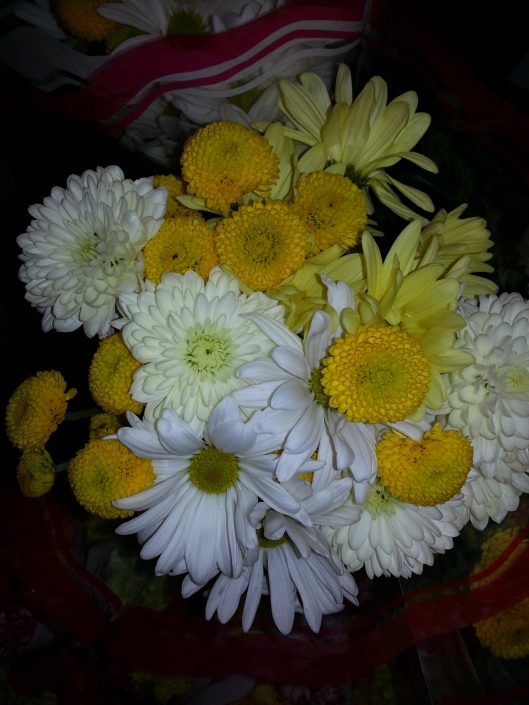 On December 30th I met someone that drove over an hour in a car with no heat to take me out to dinner.  You probably have heard of how cold the Northeast is now, so he deserves an A for effort alone.  All I had to do was walk out of my building and turn a corner.

By his pictures and short profile I didn’t think we would be a romantic match.  Not that he was ugly, but he had only 3 pictures that were just weird. One of them was a selfie in front of a mirror without a shirt.  I don’t like such pictures.  On another he had spiky hair and looked a bit off.  He looked like an old rocker that perhaps had a little too much to drink. I hope he never reads this lol.  His profile didn’t tell me much, it was just a couple of generic lines.

What made me decide to meet him was his emails to me.  From the first one he took his time and wrote meaningful things.  He asked me interesting questions about things I mentioned in my profile.  He asked me about myself.  I detected openness and honesty.  I was intrigued.  I thought that we could have a nice evening and that the worst it could happen is that I would make a new friend.

He chose a great Italian restaurant.  Extra points for not being cheap.  Upon meeting we just clicked. I saw that he was a bit shy and unsure in the very the beginning, but I think I disarmed him with my friendly attitude.  I really never met a stranger.  He turned out to be so real and open.

“… We need the sweet pain of anticipation to tell us we are really alive.” – Albert Camus

We stared and smiled at each other the whole time.  He was so different than what his pictures had shown.  I told him that.  The hair was still a little spiky but tame. I wanted to touch it but refrained from it.  Some people can be very touchy about their hair. 🙂

Before the night was over he asked me on a second date.  He told me how beautiful and funny I was and that he was having a great time.

We ended the night with a quick hug.  I would have been okay with a kiss, but I so appreciate him being respectful.

We are going on a second date tomorrow. This time we will be meeting in Manhattan. Again he is being considerate and said he will be meet me near the train station so I don’t have to go out of my way.

We both seem equally excited about this second date.  Stay tuned, I am hoping for fireworks.  If you have been reading my blog you know I have gotten excited before and things haven’t always end up well, but I am not letting past experiences curb my enthusiasm.

This anticipation is priceless so I am going to dwell in, marinate in and enjoy every second of it. I am going to be stupidly giddy and happy with butterflies in my stomach.  I am going to hope that holds my hand and that he kisses me.

I hope he is real and I have not dreamed him up.

“Never forget that anticipation is an important part of life. Work’s important, family’s important, but without excitement, you have nothing. You’re cheating yourself if you refuse to enjoy what’s coming.” – Nicholas Sparks

“It may be important to great thinkers to examine the world, to explain and despise it. But I think it is only important to love the world, not to despise it, not for us to hate each other, but to be able to regard the world and ourselves and all beings with love, admiration and respect.” – Herman Hesse

One of the worst dates ever!

Even with a second promising date scheduled I decided not to cancel a previously scheduled date I had tonight.

I didn’t like that he was a little evasive about work.  He said he was taking classes at the moment and writing a play.  I wanted to have an open mind and give him the benefit of the doubt.  I am a sucker for people that are passionate about something and he seemed passionate about the arts.

In my conversations with him he seemed a bit awkward. How wrong I was!  He was not awkward, he was just a jerk! And I don’t use that term loosely.

For starters, picture this: We are standing in line at the coffee shop and while I am asking the server a question about a pastry, he orders and pays for his coffee.  I should have said good night right then and there.  If I a guy cannot be courteous enough to pay for the lady’s cup of coffee on the first date then he should have no business attempting to date.

After finding a table and sitting down with our coffees he took a piece of a donut I got after I asked him if he wanted some.  He took a piece, ate it, then started to lick each finger more than once.  I offered him a napkin.  Then he took another piece and repeated the same finger licking exercise.  All of a sudden I didn’t want any more of this amazing coconut cream donut.  Strike 2!

He started talking about a play he wrote about religion.  It seemed interesting and I told him that.  I agreed with him that there are religious fanatics out there and people can get insane about religion.

He sneezed and I said: God bless you.  He responded by saying he didn’t believe in God.  When I opened my mouth to say something he immediately said:  “Here comes the questions”.  And from there things became confrontational.

I asked: What questions?  He said that people normally start questioning him on why he doesn’t believe in God.  I could sense his confrontational tone.  I said that there would be no questions from me as I respected his beliefs and hoped that he would respect that I believe in God and didn’t want to talk about it at that point.

He clearly was disappointed that I didn’t want to engage on a debate over the existence of God.  He ignored my wishes of not wanting to discuss the subject.  He kept going on and on trying to get a reaction out of me.  I kept saying that I could debate it but was not interested in it.

One thing I dislike most is when people try to change my mind about some belief I have.  Specially when I say that I am not interested in discussing it.

He mentioned that the main reason that he couldn’t believe in God it was because he couldn’t understand if God exists why he chooses to only help some people and not others. And if that is the case God is very incompetent. He said that with a smirk as if he expected that word “incompetent” would make me mad.

He sat back down, but instead of changing the subject he continued trying to push me to talk about my reasons for believing in God and to explain that eternal question: “Why bad things happen to good people”

I mentioned that I didn’t have all the answers and I felt it was a deep and long conversation as I would have to talk about all my studies since I was a child and being exposed to all sorts of religions and different philosophies of life, including topics such as spiritualism, reincarnation, karma, etc.

While I don’t have a problem talking about why I chose to believe in God, a Superior being, the Universe, The Light, or whatever name people choose to call it, I felt he was intent in proving me wrong.  He seemed to want a debate and not a healthy discussion.

“Tolerance isn’t about not having beliefs. It’s about how your beliefs lead you to treat people who disagree with you.” – Timothy J. Keller

I know people with different beliefs and have had many great conversations on our different believes.  In the end we end up getting even closer understanding our differences.  I think it is important to try to understand each other, with always having respect at the forefront.  But he seemed intent on proving a point and not open to listening.  I am not interested in that.

It is not only the fact that I said I didn’t want to about it.  It was also not only about what he was saying but how he was saying it.  He had a smirk on his face as if he held the knowledge in his hands and I was this poor ignorant being in the darkness.  I didn’t like the cynicism in his voice and his ironic tone.

Towards the end he started saying that I had issues if I was not willing to discuss different topics.  This is a first date and I think I am allowed to refuse to discuss any subjects I don’t want to discuss. After putting up with it as much as I could and not wanting to be in that negative energy any longer,  this time I was the one getting up and leaving. It never felt as good and freeing walking away from someone.

By the way the whole time there was guy sitting in a table across from listening to our conversation.  He would from time to time just shake his head in disbelief.  At one point I thought he was going to come over. I should have walked to his table when I got up.

Once again, for the record, I am a firm believer in God.  It sustains me, it grounds me and it gives me wings.  But I don’t need people to agree with me.  I am respectful of people that hold different beliefs. I don’t profess to have the right answer and I would be leery of anyone that think that they do.

The only thing that I hope for is the universal belief in the Golden Rule.  Let’s do no harm and let’s strive for peace, understanding and respect.