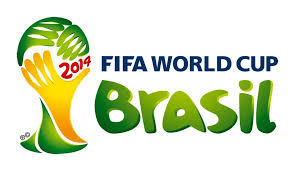 There was a lot of controversy surrounding the preparations for the World Cup in Brazil. There was too much money spent with not much to show for, unfinished stadiums, airports not ready to deal with the amount of travelers, violent protests, etc, etc. There were even moments when some people doubted it it would actually happen, and if it should happen.  One way or another the World Cup is here, so we may as well enjoy it and make the best of it.

It is a known fact in Brazil that some people think that football and carnival is a way that corrupt politicians distract the Brazilian people from all the problems.  I think that perhaps there is a grain of truth in that, but I am choosing at this time not to discuss how passive we Brazilians tend to be and how easily distracted we are with music and sports.  Right now I am just going to discuss my enjoyment of the World Cup.

When I first heard that Brazil would host the World Cup I was so excited  and ready to attend, but when the time came I decided to watch it from the safety and comfort of my living room. My fear was not as much for violence, but more for the chaos and confusion.  I now question if I have made the right decision after all who knows when there will be another World Cup in Brazil.

I am enjoying all the games, but I have to mention the Opening Ceremony. It was a major disappointment.  This is Brazil, so much was expected, so little was delivered.  We put a major Carnival production every year that is truly majestic.  For the World Cup we had 4 years to prepare and all we came up with was something that looked like it was a high school production. It was embarrassing to watch!!  I couldn’t believe my eyes and kept hoping it would get better – it didn’t!  Why? Why? Why?

Well it turns out the answer is actually just simple four letters: FIFA!!!! FIFA was in charge, FIFA is always in charge when it comes to the World Cup.  FIFA hired 2 foreigners to organize it.  Why would they get someone from outside when we have so many capable and talented people in-house? Who better to produce and stage the ceremony than the host itself?  It was supposed to be our party, but it turns out we are just the host, we are just lending our land to FIFA. It was such a wasted chance to highlight to the world the beauty of Brazil beyond Rio and the Amazon, beyond beaches and dancing girls.

Ceremony is over, so now on to the games.  Brazil started off the tournament with the game against Croatia.  It was lackluster and controversial due to a penalty kick that was called that amounted only to poor acting. We didn’t play well but we won, and I am sad to say that in this case I will take an ugly win over a pretty loss. Our second game (against Mexico) was a nail biter.  It was probably the most exciting scoreless game I ever watched, but Brazil showed it needs to improve or we will not go far. And credit to Croatia and Mexico they played very well.  Mexico’s goalkeeper was just phenomenal!  It seems all the teams have forgotten who is the sheriff in this town! Lol  Would it kill them to just let us run away with the Cup?  All kidding aside, it is good to see some so-called underdogs thriving.  Speaking of underdogs, the US was brilliant in their first game and I am looking forward to US vs Portugal on Sunday. Soccer is one of the few areas where the US is considered an underdog, I think it is good – it builds character! 🙂

We play Cameroon next and we should win easily, BUT, if there is one thing that this Cup is showing us is that there is no sure bet.  I will be glued to my TV with my heart beating out of my chest until the referee whistles the end of the game.

“Soccer isn’t the same as Bach or Buddhism. But it is often more deeply felt than religion, and just as much a part of the community’s fabric, a repository of traditions.” ― Franklin Foer, How Soccer Explains the World: An Unlikely Theory of Globalization

It is hard for Americans to understand this passion for soccer.  They call the game boring.  I understand them, they were not born into it.  I am not going to try to justify it or explain it. I am just going to describe it what it is for me.

To me the World Cup is not just a sporting event.  It is tradition, it is culture, it is patriotism, it is love, it is passion, and it is pride.   For the longest time in Brazil we were in such dire economical disaster that it seemed that the only things we could be proud of was soccer and carnival.  Here is something that we are good at, here is something to be proud and happy with. (happy to report there is much more to be proud of)

“Patriotism is supporting your country all the time and your government when it deserves it.”  ― Mark Twain

Soccer is a sport universally loved.  At World Cup time people don’t root only for their team, but for their country.  No matter your social status, religion, gender, color, political affiliation, anything, at this one time we are all together hoping for the same outcome.  For a month it seems we forget the differences (for the most part, unfortunately as we have seen in Kenya, some use the opportunity to level attacks).

This time brings me closer to my roots, to my country. I am also American and I will be watching and rooting for the US, but I cannot lie, my heart belongs to Brazil.  I am Brazil and the World Cup and Brazil and the World Cup are me.  I grew up with it, it is in my veins.  I rarely watched soccer, but World Cup is different, it is a whole other level.  I look forward to it and I watch every game I can.  At work I have 2 computer screens, at this time one is for work and the other is for the Cup. If Brazil is playing, then I go home to watch it.

I am looking forward to the rest of the tournament no matter how Brazil fares. (is it bad to say that I want anyone to win except Argentina and Italy? 🙂 Argentina-it is a Pele vs Maradona thing, Italy- I don’t want anyone to equal our number of wins! )

I hope that at the end the fans that traveled to Brazil will take back with them amazing memories of a country, that, even though it needs a lot fixing, is still full of amazing welcoming people.  I hope they remember the people, the beauty, the experience.