Slowly things have been getting back to some kind of normal (for some of us). Still no power in our offices but hopefully by Monday Con Edison will come through.

The New York City Marathon has been canceled, not postponed, CANCELED! I am a little sad over it!

I am sad because the Marathon is part of the New York City history and also for all the athletes that eagerly waited and trained for it and have come from all over the world. 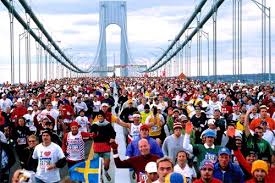 There was so much controversy over it, that I do understand Mayor Bloomberg making this decision. Some boroughs, specially Staten Island were complaining that resources and personnel that is needed for the hurricane relief was going to be used for the race, even after the mayor making assurances to the opposite.

I have electricity and my apartment has not been destroyed by the hurricane so I am in no position to judge, and that is not my intention. I understand both sides of the argument for or against the race.

I hope that Staten Island and all other boroughs and towns get the much needed help they need.