“Isn’t it nice to think that tomorrow is a new day with no mistakes in it yet?” ― L.M. Montgomery

Some days are difficult and what gets me through them is knowing that tomorrow is another day.  Thanks Heaven for each new day! It brings new opportunities, new chances to start over and get things done.

Some days feels like a wasted day.  I look back and realize I accomplished nothing.  I am trying not to waste energy being sorry for yesterday’s failures.  There is nothing I can do about it.  I just need to focus on the now!

My wish for you (and I) is that you fully embrace each new day! Don’t waste today by dwelling on yesterday! You can’t change the past, but todays is yours to do as you please.

“Write it on your heart
that every day is the best day in the year.
He is rich who owns the day, and no one owns the day
who allows it to be invaded with fret and anxiety.

Finish every day and be done with it.
You have done what you could.
Some blunders and absurdities, no doubt crept in.
Forget them as soon as you can, tomorrow is a new day;
begin it well and serenely, with too high a spirit
to be cumbered with your old nonsense.

This new day is too dear,
with its hopes and invitations,
to waste a moment on the yesterdays.”

“Truth is the offspring of silence and meditation. I keep the subject constantly before me and wait ’til the first dawnings open slowly, by little and little, into a full and clear light.”― Isaac Newton

I am going to start by apologizing.  First, I didn’t have a chance to finish the post about going on the date with The Enigma, so that draft went to the trash. It was all about expecting without having expectations. Second, this post, about finally going on the date, will be a rush job.

The date was on Friday at The Rambling House in the Bronx.  We met outside on the street.  He was parked in a no parking zone waiting for me so he could direct me where to park. He exited his car with a big bouquet of flowers for me (pic below).  I gave him a hug. 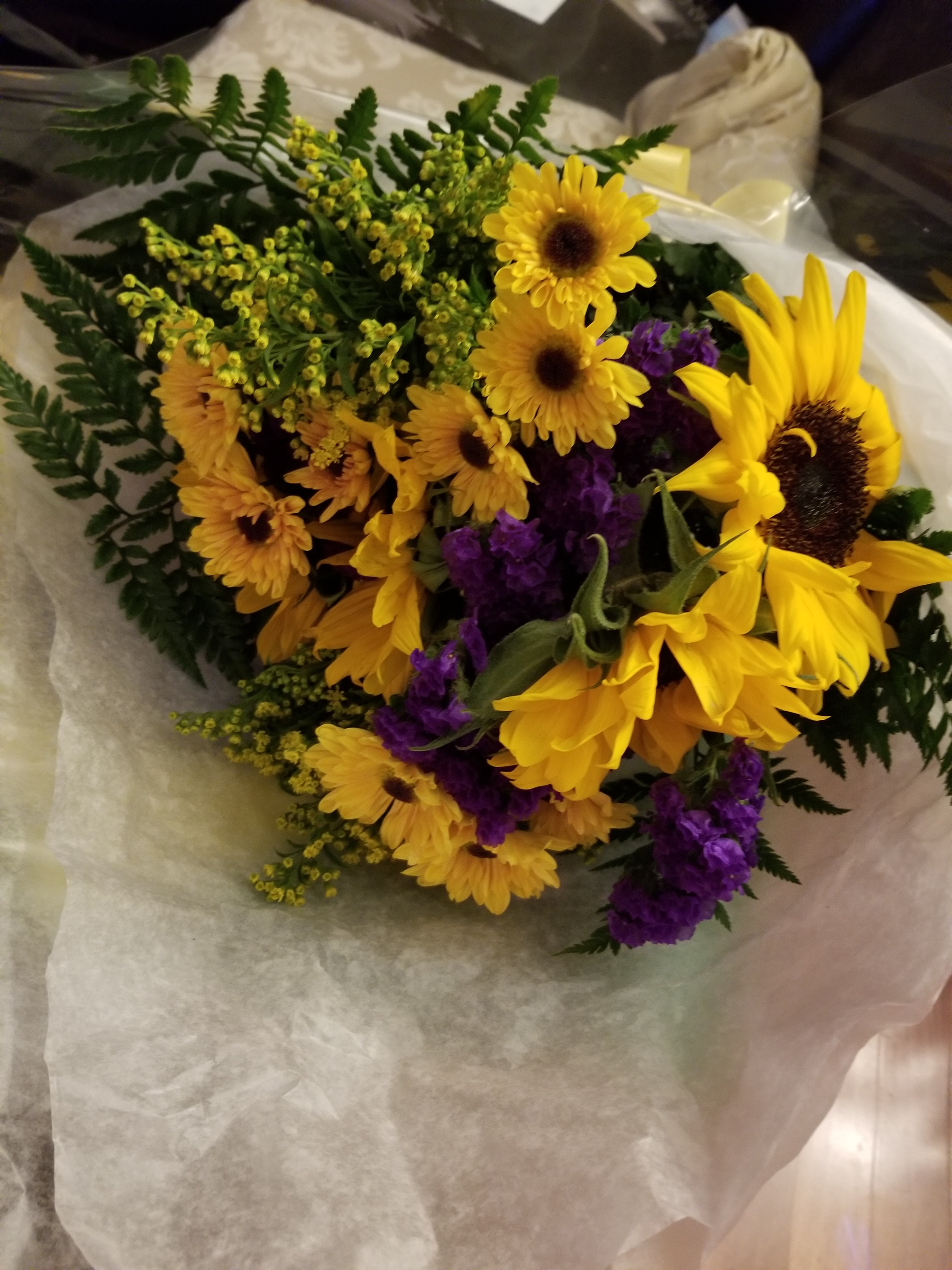 I was so surprised.  I didn’t expect flowers at all. In hindsight I should have since he is very romantic and such a gentleman.  I was also surprised that he knew that I was not a roses kind of girl. My favorite flowers are sunflowers and daisies, and any yellow flowers. It had 3 beautiful sunflowers in the bouquet.  He said roses are too predictable.

He also brought me a book.  “Living from The Soul – The 7 Spiritual Principles of Ralph Waldo Emerson” by Sam Torode.   He said he bought one for him also.  I joked that we will have a mini book club now. Pic below. 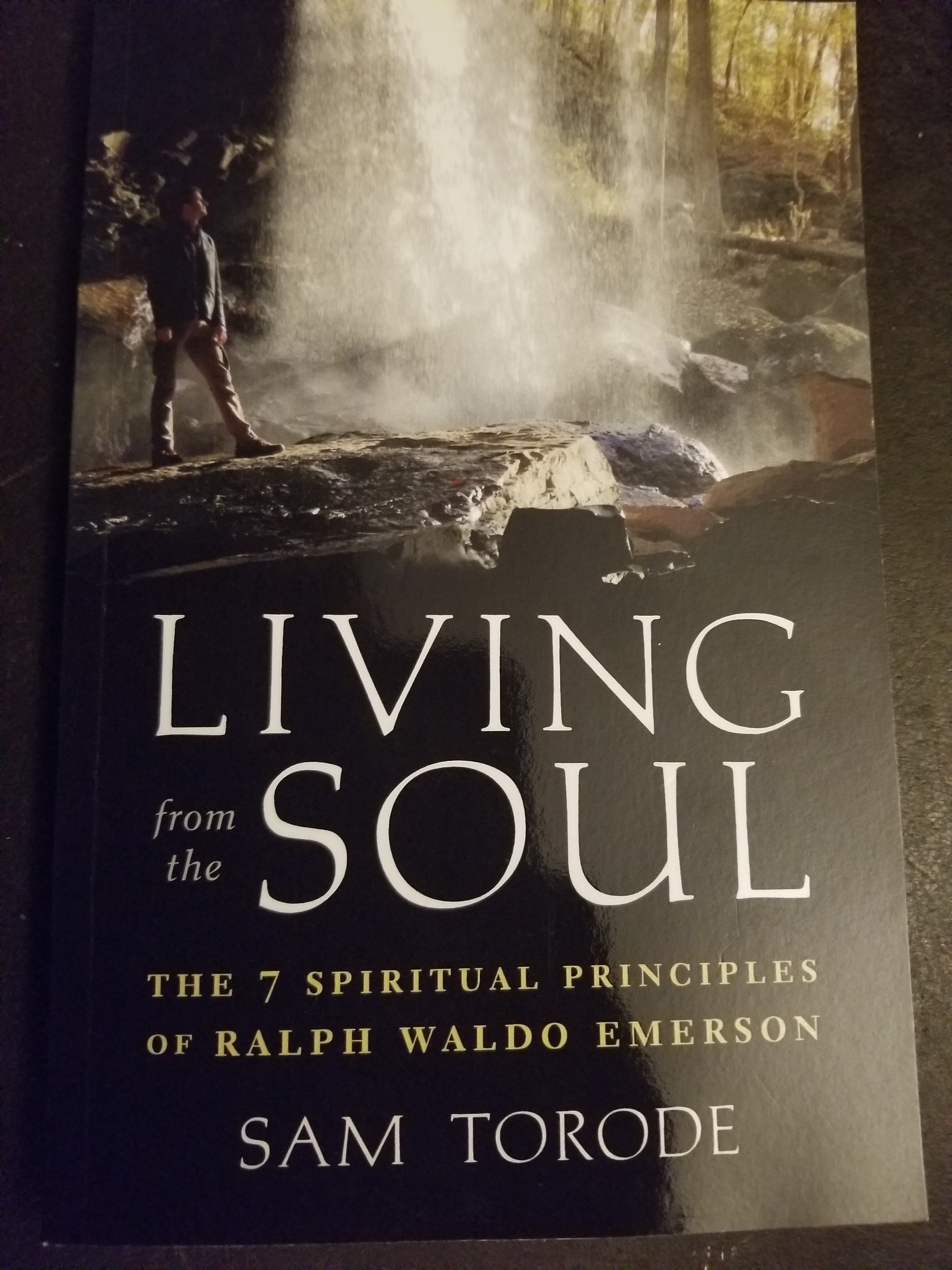 He was wearing glassed and smelled nice. He was casually dressed in khakis and a flannel shirt.  I was surprised how happy and smiley he was.  His pictures had him always so serious and mysterious.

“A gentleman is someone who does not what he wants to do, but what he should do.” ― Haruki Murakami

He was not fat, but heavier than his pictures.  I had already expected that since he had told me that he hasn’t been able to exercise since his leg injury. And as a side note he had a hospital bracelet on.  Not from last week’s trip to the hospital. From just that morning.  He fell in the middle of the night as he attempted to navigate a spiral staircase in the dark in flip flops.  An ambulance had to be called.  He said that he would go to this date even if he had to crawl.

We had a great time.  The conversation flowed.  He had a cider and I had a cosmo.  A girl passed around offering free beer but we both declined.  He is Irish but not much of a beer drinker. He had the turkey and I had the salmon.  We shared a cheesecake for dessert.

I am not sure how much he tipped but the 2 waitresses came back 3 times each to the table to say thank you.  I asked him and he just said he is a good tipper.  Another point for him. I dislike bad tippers.

He held my hand and told me how beautiful I was and how great I smelled.  He made me feel beautiful, special and safe.

“The gentleman is dignified but not arrogant. The small man is arrogant but not digified” ― Confucius

The date lasted about 3 hours. I could tell his leg was hurting him, so I suggested we go.  We said goodbye at my car door with a quick hug and a peck on the cheek near the lips.  Everything was very easy and comfortable with him.

We are going on a second date on Wednesday. It is my turn to choose where to go, so we will probably stick to my neighborhood so I don’t have to drive.

On Thursday he is going to travel to a couple of different countries for business.  He said he will be in touch every day but we shall see how that will go.

I have many questions about one of his businesses and his overseas traveling. I don’t want to imply that it is something shady but it is just so foreign and mysterious to me.  He already mentioned a lot to me and says I can ask whatever questions I want, but at this point I am not even sure what questions to ask.

At one point I told him that his stories seem fake, about the war, etc.  He laughed and didn’t get offended.  He knows I will say what comes to mind and as I see it.

For now I am taking it all in slowly.  I am enjoying his attention.  The future seems so full of promise.  But we all know that I have been here before, so I am proceeding with caution.

“If people just took it a day at a time, they’d be a lot happier.” ― Richard Bachman