“Until one has loved an animal, a part of one’s soul remains unawakened.”
― Anatole France

I grieve never seeing him again after the break up.  I was always welcomed to go see him, but I never wanted to.  I feared he would think I was returning to stay and then at my departure he would feel abandoned all over again.

I am angry that no attempt to treat him was made.  His hind legs were giving away and not supporting his body for a couple of the days, then on the third day he couldn’t get up.  The vet was called and he was put to dead.  That simple!

Too simple if you ask me.  If I was there things would have been much different.  I would have definitely attempted to treat him.

I am being judgmental.  I have no right to be.  It was his dog, so it was his call.  I remember him saying that if Chief ever got old and sick that he would not waste time and money with treatments.  He also believed that trying to treat him would cause more suffering.

In the end no one knows what was the right thing to do.  Perhaps treating Chief would be just for my benefit, for me to say to myself that I did whatever I could.

Perhaps it was indeed for the best, perhaps it would only cause him unnecessary suffering.

In his honor I will liberate the dog in me.  I will be freer with myself and will care less about what people think of me and my antics.  I will get so excited every time I see a loved one I will almost pee myself.  I will make sad puppy eyes any time I want something.  And of course, I will always steal a cookie any time no one is looking. 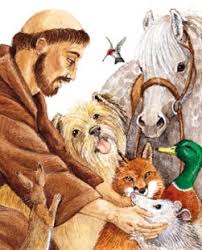 O Divine Master,
Grant that I may not so much seek
To be consoled, as to console;
To be understood, as to understand;
To be loved as to love.