always learning, but soon, dating trials and tribulations, dating younger men, everything is a lesson, Ghosting, ghosts from the past, it is not if, it is when;, keeping positive, keeping the faith, not now, relationshps

“A good place to meet a man is at the dry cleaner. These men usually have jobs and bathe.” – Rita Rudner

At which point I said I was not interested, but he is still trying.  Here are the texts he sent the following day (May 12): 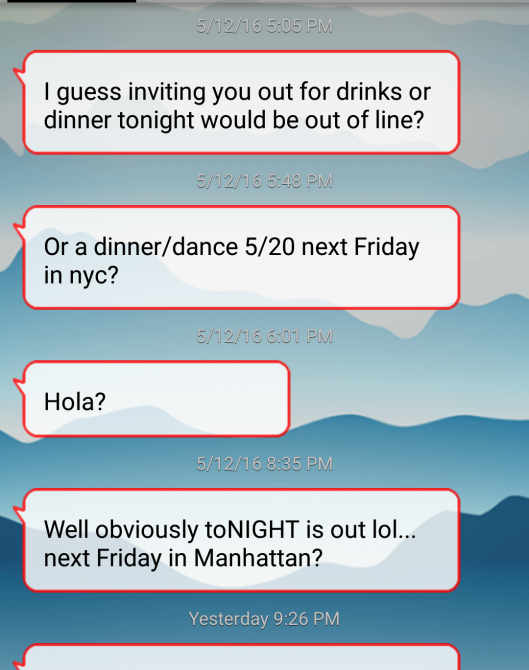 I didn’t reply, I thought he would get the hint, but then again he doesn’t understand hints, so below are the texts from yesterday, to which I replied: 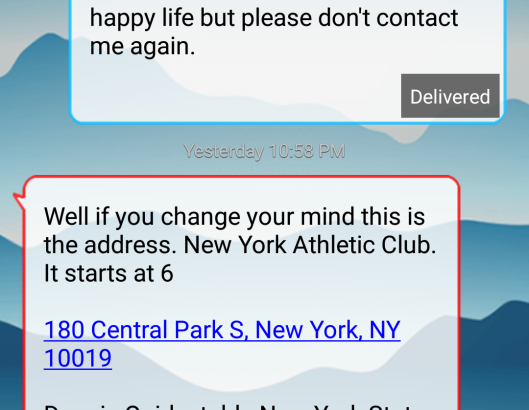 I cut off the rest of the message as there were personal information and names of people pertaining to the details of this event. I didn’t reply and will not again.

I have to come clean and confess that a tiny part of me would love to attend this Dinner Dance event.  I also would love to see him again after almost ten years.  I am curious.  But not looking for drama.  So this is an invitation that was easy to pass up.

If the past is any indication I will continue to hear from him every now and then.   It is up to me not to reply again.  Even though he has no business contacting anyone if he has a girldfriend I have no ill feelings towards him and I still think he has a good heart.  I feel he is just misguided.  He should invest the time he is wasting texting me into fixing his relationship.

Clearly they are growing apart.  I once too thought it was okay for my boyfriend and I to go to events alone and take vacations apart.  I am talking about the first boyfriend (one day I will write about that relationship – we were together for 20 years!!).  I remember he never wanted to attend my work events.  Even though I had always lied to myself and said it was fine, that he was just not comfortable in that enviroment, it was never fine.  It signaled  problems in the relationship.  We disguised the unwilligness to support each other as freedom and individuality.

Relationships are hard work.  It takes compromise and the willingness to venture into the uncomfortable to support each other.  I want my significant other to be there next to me.  I no longer need to stand alone somewhere to prove that I am my own person.

I would hate for somebody else to spend 20 years with someone that is not their match.  Still, not regrets!  Hidsight is 20/20.  Moving forward.  Looking back to just see how far I have come!

and file all this under: “Keeping the faith!  It is not if, it is just when”

“Sometimes the comfort of being in a relationship lulls you into mundane complacency; you become irrelevant in each other’s lives. We call this phenomenon ‘growing apart’.” – Steve Maraboli

13 thoughts on “An update on my dating life, or lack thereof”