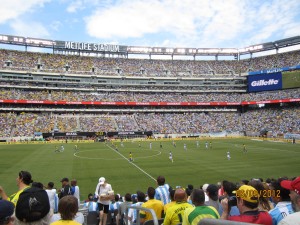 I was one of the 81,994 fans that attended the Clash of the Titans match at Metlife Stadium in East Rutherford, NJ yesterday. That was a record attendance for a soccer match at that stadium!

The game was between my beloved Brazil and our archenemy Argentina.

Brazilians are one of the most friendliest people in the world.  We love all and are loved by all.  But when it comes to our neighbor Argentina things can get a little dicey.

Both countries think they are the best country in South America. Both think they have the best natural resources, most beautiful women, and of course best soccer players.

There is the never ending debate in the soccer world as to who was really the best player: Pele (Brazil) or Maradona (Argentina).

I, and thousands more, was really looking forward to yesterday’s match. And it was all that it was promised and more.  They both had their best players from their national teams (as it was agreed per their contracts).  Brazil brought their  Olympic team, which is a younger team, but equally talented.

I was there with a group of 22 co-workers and clients raging from soccer fans to soccer players to “don’t even know what soccer is”, and the general consensus at the end of the game was that it was an amazing game.

Unfortunately Brazil lost! The score was Argentina 4 goals, Brazil 3.  Of course I wanted Brazil to win, still I have to concede that their best player, Lionel Messi, had an amazing performance.  He scored 3 out of Argentina’s 4 goals.

Everyone, players and fans were well behaved, for the most part.  There was a little scuffle at the last 2 minutes of the game between a couple of players but it was minor and it didn’t really make the game any less great. As far as the fans I didn’t witness any misbehavior, only the usual taunting and loudness.  Mostly all had fun with their loud music, singing and dancing.

I was just a bit confused by the halftime entertainment.  It was not really necessary to have any.  I don’t think any fan would have complained or even mentioned the lack of anything during halftime.

First they brought 3 Argentinian couples dressed in black fancy attires to dance the Argentinian tango … on the grass.  It just looked weird and so out of place, I felt for the dancers.  They should have, at least, put in some type of floor covering.  Then perhaps would have made more sense.  Can you imagine dancing wearing high heels on the grass? the tango nonetheless!

After that they brought Brazilian drummers and male dancers performing soccer skills and some capoeira (a type of martial art and dance).  It was more fitting than tango for a soccer match, but still it was a bit lackluster.

All in all it was a great day with tailgating pre and post game. I cannot believe that even after 2 hours after the game had ended the parking lot where we were was still half full!

It was only a friendly, exhibition match, it didn’t really count for anything.  At the end of the day, we still have 5 stars on our jersey for each of our World Cup wins, while Argentina has only 3!  (sore loser? yep, a little bit!!)

18 thoughts on “Clash of the Titans”